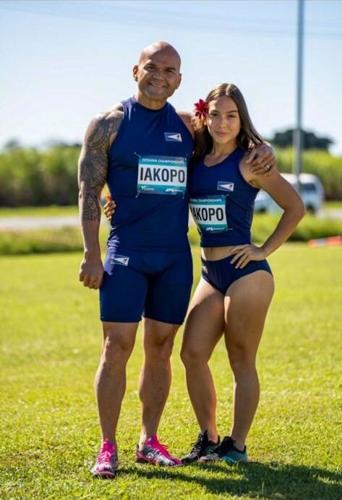 Stanley and daughter Filomenaleonisa Iakopo pose for a photo before competing in the 2022 Oceania Athletics Championships  held in Mackay,  Queensland, Australia last week. 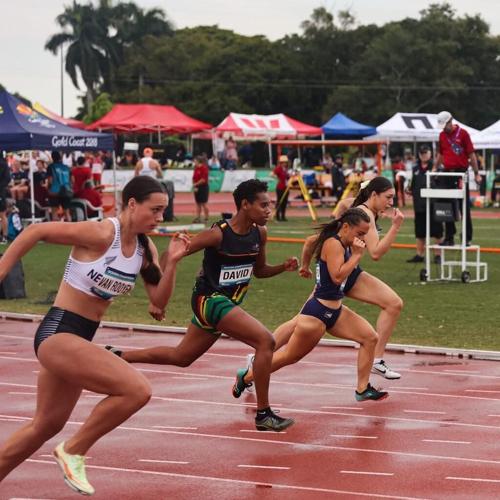 Filomenaleonisa Iakopo, second  right, pushes through at the starting line of the 100m event in the 2022 Oceania Athletics Championships  held in Mackay, Australia last week.

Stanley and daughter Filomenaleonisa Iakopo pose for a photo before competing in the 2022 Oceania Athletics Championships  held in Mackay,  Queensland, Australia last week.

Filomenaleonisa Iakopo, second  right, pushes through at the starting line of the 100m event in the 2022 Oceania Athletics Championships  held in Mackay, Australia last week.

“Competing with my dad is always a blessing,” Filomenaleonisa said. “I love racing alongside him. He continuously pushes me and he is the best running partner and coach to have.”

“It’s truly a blessing for me to compete alongside my daughter,” Stanley said. “I never thought we could be teammates and run the same events. We, her parents, are very proud of her. Filomenaleonisa is focused and committed to be the best and hopefully become the Pacific’s speed queen and record holder.”

It was Filomenaleonisa’s first time competing internationally but that did not cross her mind.

“I wouldn’t say anything was tough about the Oceania Athletics Championships,” she said. “I was focused, confident, and excited. I ran against…powerhouses and it was an honor too. They never intimidated me but only motivated me to become as fast if not faster than them one day. It was a very humbling experience that I'm very thankful to have participated in.”

Filomenaleonisa  said she and her father never planned to compete in the Oceania Athletics Championships. But a month before the event, they decided that it was an opportunity that they should experience before the Pacific Mini Games which the CNMI will host on June 17-25, 2022,

Filomenaleonisa is only 16 years old but has been competing in athletics since she was a seventh grader.

“I don’t train as much. I just focus on my daughter and my four boys’ training track. I run and compete to provide support, guidance and motivate my kids to become better athletes. It’s in their blood and DNA.”

Stanley added, “I am extremely honored to be coaching [Filomenaleonisa]. This was why our father and daughter team came about. Me competing was to support her and guide her in these huge events, and she exceeded and performed very well.”

How would you describe the state of the CNMI economy these days?